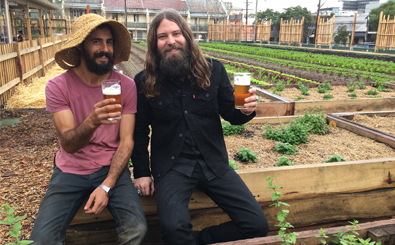 Pocket City Farms, Camperdown Commons and Acre Eatery have joined forces to create an urban farm and community hub in the heart of Sydney’s inner west. Fresh organic crops now sprout from the once deserted bowling greens of the Camperdown Bowling Club and will soon sell fresh produce to the local community too.

The on-site restaurant for the project, Acre Eatery plays the role of the ‘farmer’s home’ and gets the food on the table as fast as is possible.

Young Henrys was invited to make use of the first produce from Pocket City Farms, 180kg of Queensland Blue Pumpkins. Once the pumpkins were harvested, they were cooked by Acre Eatery head chef Gareth Howard and then used by the Young Henrys brewing team to craft the Spiced Pumpkin Ale.

Check out the video below, which explains the idea behind Pocket City Farms and how the collaboration came about.