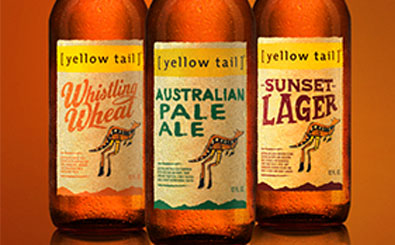 Casella Family Brands (CFB) has launched a [yellow tail] beer trial in the USA, as it looks to take advantage of the affinity the country’s consumers have for the brand.

An Australian Pale Ale is now available in kegs in the Tidewater region of Virginia and it will be rolling out in on-premise locations in Rhode Island by mid-February.

The [yellow tail] beer range will include Australian Pale Ale, Sunset Lager and Whistling Wheat and they will be rolled out across Virginia and Rhode Island, in both on- and off-premise, from the beginning of March.

At this stage CFB is only focusing its beer in the USA market and the decision to test the product came after consumer research suggested that USA consumers would welcome a beer product from [yellow tail].

The beers for the trial in the US were brewed and packaged under contract at the Australian Beer Company’s brewery in Yenda.

In launching the beer, CFB said: “[yellow tail] beer is refreshing without bitter notes so frequently found in other beers.

“The beer is full of taste and highlights the wonderful natural flavours that Australia has to offer. The brews have been created to reflect the sun-kissed Aussie lifestyle, offering consumers a craft beer that is flavourful yet approachable.”