According to Wildflower’s Topher Boehm, to the collaborators’ knowledge it is the only modern-day commercial beer made only with ingredients, including yeast, from the state of NSW.

Currently in barrel, the beer is fermenting at Wildflower’s Marrickville facility using only foraged wild yeast wrangled from flora and spontaneous brews across NSW.

Boehm told Beer & Brewer that the idea for the beer came from Stu Whytcross from Voyager Craft Malt, located in The Riverina.

“It was really his conception – he rang up here a month back and said the guys from Ryefield, the hop producers, are going to have a little bit of harvest, so let’s do something with all of our respective ingredients.”

Ryefield Hops, from Bemboka on the far south coast of NSW, was only founded last year. The crop used in the new beer is the farm’s first commercial harvest, so there are only enough hops for one single brew – but in the future as production expands, Boehm hopes to one day move Wildflower to entirely NSW-grown hops.

Boehm also credits nearby Batch with playing a huge role in helping the beer come to life, being early adopters of both Voyager and eventually Ryefield, and providing support to Wildflower in creating the beer that then ages in the Wildflower barrels. 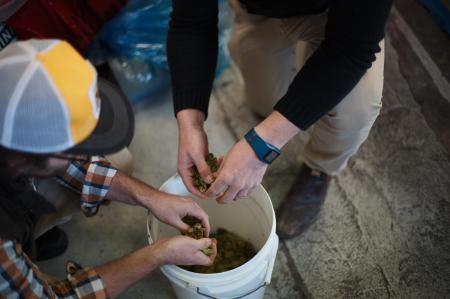 “Not only for there to be a consumer that is interested and switched on for a product such as this, but more so that the industry can support actually local agriculture: local maltsters, local hop growers. And making it a product of a place, rather than something that’s just made in a place.”

Though Boehm says that he doesn’t know exactly what the beer will taste like –“you can’t engineer something like this, it’s just going to go the way that it will” – the idea for the beer is a “Growers Harvest Ale”.

“We’re taking all of the things we each have and making a beer with it all so that’s a product of place,” he explains. “It will be around 5%, slightly malty because we used some Vienna malt from Voyager in there, with a moderate body – it’s just going to be like an ale.

“My aim not only with this project but my larger project is to make drinkable beer, so it will just be a very drinkable beer – using my yeast and suitable wild yeast, it’ll definitely pick up some wild fermentation characteristics, a bit of tartness and things like that. But like all of the Wildflower beers I want all the parts to be in balance with each other.”

At this stage the working name for the beer is Waratah – the state flower of NSW – though Boehm told Beer & Brewer that this is still TBC. 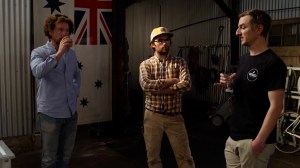 The batch will produce around 500 bottles, and it will become available during Sydney Beer Week in October; firstly with an event at Wildflower on the 21st and also at a celebration of entirely NSW produce at Bloodwood in nearby Newtown on the 24th.

Wildflower will open early on 21 October to not only release the beer, but also host a morning information session with talks from each of the producers, focusing on techniques you can use at home to mimic what they have produced.

He also said that the beer should be available on Wildflower’s online store in addition to the cellar door, but at this stage that it won’t be distributed into trade. More information about the beer will be released over the coming months.