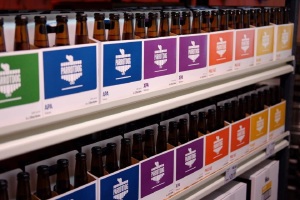 Parrotdog beers will now be available across Australia after the Wellington-based brewery announced a partnership with Square Keg distribution company.

Square Keg will import and distribute Parrotdog beers throughout Australia in a deal which cements the close relationship the two businesses have had for a number of years. That relationship now gives Australian beer drinkers the chance to sample some of Parrotdog’s beers, starting with Rifleman XPA in 330ml can format.

Matt Kristofski, one of Parrotdog’s co- founding partners said: “We’ve been working on this for a while with the Square Keg team and now our new brewery and bar in Wellington is up and running, we believe the timing is perfect.

“We are really excited to be partnering with Square Keg and to be extending the availability of our beers to the broader Australian market – there’s been a lot of interest in our beers from craft beer drinkers and the Trade in Australia”.

Square Keg’s Managing Partner, Garry Hastings added: “We are very much looking forward to partnering with Parrotdog, it’s an exciting opportunity and will be a great addition to our portfolio.

“We’ve been wanting to add a New Zealand brand to our range for some time but had to make sure it was the right one for drinkers, the Trade and importantly the partnership had to be based on like-minded beliefs about independence and a love for great fresh beer”.

Square Keg will be bringing a variety of Parrotdog beers into Australia in the coming months, for further information, contact your local Square keg sales person.