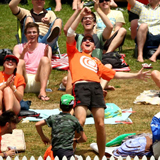 If you’ve been watching the cricket recently, you will have noticed a plethora of ‘can someone in the stands take a catch?’ competitions. Here in Australia, it’s generally some hapless F-Grade ‘celebrity’ who sits mournfully on a podium in the stands, trying to catch a winner for their home viewer while dodging empty plastic cups whenever the camera’s on them at the ground…

But in New Zealand, Tui Beer got into the swing of things by letting just about anyone in the crowd in on the game. The conditions were relatively simple: Wear a Tui T-shirt, plant yourself in the crowd, and if you caught a six, on the full, one-handed… then Tui would write you a cheque.

This week, wonder of wonders, someone actually pulled it off. Michael Morton took a screamer on the hill in Hamilton – and pocketed NZ$100,000 for his troubles.

Watch the video of the catch here – and watch it right to the end, for the requisite awkwardly-executed high-fives from the people around him as he celebrates his magnificent effort.