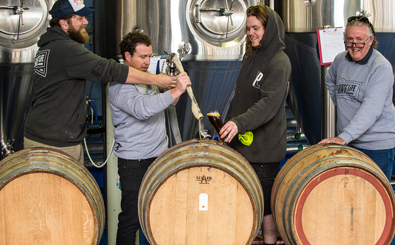 A series of craft beers aged in barrels from Australia’s most famous wine region will be launched by Pirate Life Brewing this month.

The South Australian brewer has teamed up with Barossa Valley’s Tomfoolery Wines for the series, which will include a black ale aged in tempranillo barrels, a saison in grenache and a stout in shiraz barrels.

“This is not a hop driven product, it’s more about flavour and it works well in bottles,” he said.

The small batch beers in 500ml bottles will be launched with the release of the black ale this week. The saison is expected to be available from October while the stout will get its release in March.

“The boys did a lot of barrel-aged work at BrewDog with whisky barrels so it’s something we’ve been playing around with because you never know what the result is going to be,” Cameron said.

“After a beer’s been ageing in a barrel you’re not sure what elements it’s going to pick up from the barrel and you don’t know how the beer’s going to react after sitting for four or five months.”

Pirate Life also recently released a 3.2 per cent porter in kegs and a 7.1 per cent stout.

Cameron said the porter would likely be put into cans in the coming months in time for summer.

“We believe there’s a real opportunity for a mid-strength dark beer in this country,” he said.

“I think a really nice lightweight, easy drinking, mid-strength porter has got some legs. The stout will continue on through next winter.”

Founded by brewers Jack Cameron (Mick’s son) and Red Proudfoot, who worked together at BrewDog in Scotland, Pirate Life was launched in Adelaide in March 2015 with about 17,000 litres of packaged beer.

It will also this month begin managing its own distribution across Australia.