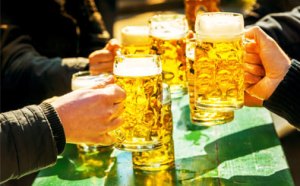 AB InBev has announced that its new technique to put bubbles in beer in a way that reduces energy output will be made available to other brewers for free.

Traditionally, brewers have carried out a rolling boil on the wort in the kettle in order convert some of the liquid into steam, which in turn helps to clarify the wort. However, the energy required to bring that water to the boil is significant, so AB InBev has taken a different approach.

“Our innovation is to heat everything up to just below boiling point, which provides 80% energy savings at this point in time,” explains David De Schutter, the company’s research director for Europe. “There is a lot less steam released, which allows you to spend less on water. In our case, we managed to go from 5% evaporated water to less than 1%.”

By substituting the steam bubbles with nitrogen or CO2, the brewer is able to use a more inert gas. While the wort has to be heated, it doesn’t have to be boiled, which reduces energy usage considerably. The majority of sites are using CO2 collected from fermentation. This is then purified and compressed before being added to the kettle.

“It’s a closed loop cycle within a brewery and a much decreased energy footprint from the brewery,” says Stephen Exinger, AB InBev’s zone technical director for Asia Pacific South. “You achieve the effects of boiling without actually boiling the wort.”

The process is currently used at AB InBev’s largest Australian brewery – Abbotsford Brewery in Melbourne. The Yatala Brewery south of Brisbane doesn’t use it, instead utilizing a highly efficient energy recovery system. However, AB InBev claims that should all of its breweries around the world use this process, it would reduce its global CO2 emissions by 5% a year, equivalent to the energy consumption of 120,000 families.

In addition, given that most smaller breweries won’t have such energy recovery systems, AB InBev is opening its technology up for public use for free.

“For smaller breweries, it would make sense to use our process,” says Exinger. “AB InBev is opening this up for public use for smaller breweries for free. They’ll need some gas to distribute, but most will already have CO2 available in bulk.”

For more information, brewers can access the AB InBev website, while the brewer also intends to set up a designated hotline to its experts in Belgium.