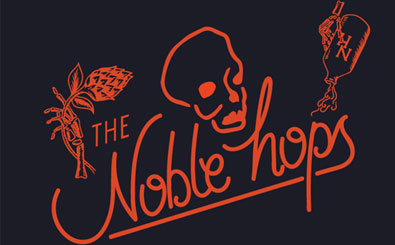 The Redfern rum-soaked small bar known as The Angry Pirate is in the midst of a rebirth, and will soon be opening its doors as a beer-lover’s paradise.

The Angry Pirate co-owner Peter Groom is teaming up with new business partner Joe Wee to create a destination venue in the up-and-coming bar scene of the inner Sydney suburb.

“We’d been running The Angry Pirate for a couple of years and my business partner is moving off overseas, we had a look around and we decided to put it on the market, and then we met Joe and in the beginning it was looking like a straight transaction, but the more we got talking together we basically fell into step,” says Groom. “He was like ‘I have this idea’ and I thought ‘that sounds like a fucking cool idea’ and very quickly we just started marching in the same direction.”

And that direction just happens to be craft beer.

“Ideally we will make this place a destination for discerning beer drinkers, but we also want it to be a neighbourhood bar,” says Wee. “So the idea is to create a venue that is accessible to everybody – and 200m from the train station it’s an ideal spot.”

Wee goes on to add that the urban revival of the Redfern area is working in their favour – however he and Groom are also happy to fly a little under the radar.

“We don’t want something that stands out too much. We’re going for something quite industrial looking and very basic – brick walls, no crazy furniture,” says Wee.

Groom concurs, saying that they are aiming to preserve the intimacy of the original.

“Coming on from what The Angry Pirate was, which was this vibe of dimly lit smuggler’s den sort of thing, and the transition and exposing the brickwork, the bar is going to maintain that intimacy, but it will sort of metamorphosis into the next rendition,” he says.

Groom is also keen to point out that while the new bar is focussed on beer, there will still be plenty of familiar touches for their old clientele who loved The Angry Pirate.

What is new is the 10 taps of rotating beer, with at least half the real estate being reserved for local breweries – a conservative number given the ambitions the duo have.

“We can only fit 10 taps, we tried to get as many as we can,” says Wee. “The issue is that the venue is so small we don’t know how much beer we can push in the Redfern area.”

However, they are confident that given the thirst for beer in the area, the bar will attract a large number of local and not-so-local customers.

“I know that we’re giving the people in this area something like The Local Taphouse, whereby if you live round here and into Zetland and Alexandria and Waterloo, you don’t have to schlep all the way over to Darlinghurst or to Newtown – you can just come here and try some interesting and tasty beers,” says Groom.

Wee explains that the plan is to have a focus on inner western breweries with their mates at Batch, Willie the Boatman and Young Henrys and the rest, all at the top of the list when it comes to kegs. And their beer plans don’t stop there.

“We’re going to have brewer tap takeovers and more, particularly for the inner west brewers because Pete and I know them pretty well,” says Wee. “And we also want do some collaboration brews with them so that we can do our own local beer.”

Groom is particularly excited to create a local brew for their suburb.

“As far as we know there is no one brewing a Redfern beer – Newtown can have the [Young Henrys] Newtowner, but Redfern needs a Redferner or whatever we decide to call it,” he says. “It’s very exciting. Certainly for me. Out of the two of us, I’m the one with the hospo experience – creating cocktails and infusions and so on – before The Angry Pirate, during The Angry Pirate, and now, and it’s really exciting for me to have met Joe and be working with him and be part of the new Noble Hops, because Joe comes with all of this brewing experience that I think is really exciting and really interesting.”

In the fridge, the boys say that the list will extend to 20 or 30 interesting international and Australian brews that will also be continuously rotating.

“Not so much a core range but more crazy stuff,” says Wee. “It gives us a bit more freedom but also people will think ‘oh they have something that I haven’t seen before’.”

Groom says that they have high hopes for the bar, given that there was a trend toward beer even when it was still The Angry Pirate – particularly with their female clientele.

“One of the things I found really, really, interesting, when we had The Angry Pirate we saw so many ladies coming in and drinking craft beer and taking a real interest in brands like The Grifter and Stone & Wood and others,” he says.

While the cocktail list in The Noble Hops will be reined in from what it was during its Angry Pirate days, Groom says that he is keen to experiment with beer.

“We’ve got a couple of ideas up our sleeves with sort of ‘marrying’ drinks, like beers in cocktails and that sort of thing. But we don’t want to show our hand too much, we want to keep a few things to ourselves.

“Looking at how well certain things went previously – I know a lot of people did this but we did bacon-washed bourbon and we spiced our own rum, which was very, very popular – we’ll be taking aspects of that. I’ve been having a little bit of a look at using hops and those sorts of things, particularly with the darker beers that we can really do some fun stuff with,” says Groom.

While the bar is still in its renovation stage, you can keep up with them on Facebook.