The Coopers Brewery family tradition is rolling on, after Andrew Cooper, a sixth generation descendant of Coopers Brewery’s founder Thomas Cooper, has joined the company, taking up the role of National Account Manager at Coopers’ distribution firm, Premium Beverages in Melbourne. 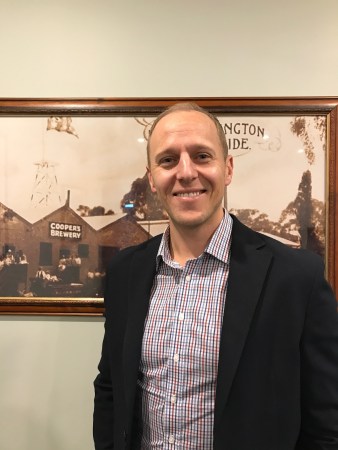 Andrew, the son of Coopers’ Chairman Glenn Cooper, joins his sister Rachel Cooper Casserly as a sixth generation family member with the business.

The move to Premium Beverages comes after Andrew, who has a degree in economics and an MBA from the University of Adelaide, had successful stints working in Singapore with Diageo, Pernod Ricard in Sydney and also with the Macquarie Group in Adelaide.

Coopers’ Managing Director, Dr Tim Cooper, said it was timely that the next generation of Coopers began to transition into the business.

“Andrew has forged a strong career outside the brewery and developed skills that will be important as the company moves forward,” he said.

“Coopers makes it clear to all family members that they are not guaranteed jobs at the brewery just because they are a Cooper.

“They are encouraged to develop careers outside the brewery, but if an opportunity arises, then they may be invited to join.”

Andrew said that while it had been a long term ambition to join the family company, he had always known that he had to “earn his stripes” before being considered for a position.

“It’s always been important to consider what you can do for the business rather than the other way around,” he said.

“I’m looking forward to this new opportunity and to what I can learn and contribute in this role and to Premium Beverages.

“My long-term ambition is to continue to tell our story and I hope to one day play my part in future leadership.”

“Generations before, in particular the 5th generation, have devoted themselves to growing Coopers and sharing our great beers. Our story is truly authentic and is becoming increasingly unique in today’s day and age.

“Coopers has been proudly family and Australian-owned and operated for 155 years. I’d like that to continue another 150 years and beyond.”