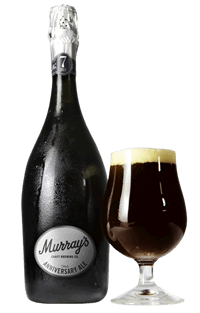 Every year Murray’s brews a beer to honour the brewery’s birthday and 2012 is no different.

While the brew changes year on year it is always a big, oak-aged limited release.

And this year is no different. According to Murray himself, the 7th Anniversary Ale is among their biggest, most complex beers yet.

A Belgian-inspired Barley Wine (weighing in at a whopping 15% ABV so don’t drink the whole thing yourself) with a twist on last year’s edition.

This year, cherry wood-smoked malt has been added to the malt profile, which the brewers report as contributing a really interesting layer of smoky complexity to the beer.

Murray’s 7th Anniversary Ale is out on 7 December. Only 1000 bottles have been produced.