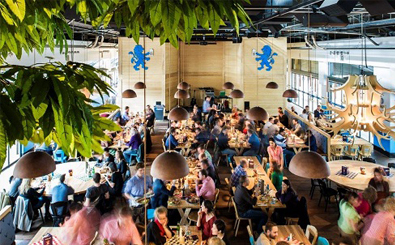 Inside Munich South Wharf in Melbourne

A 750-seat Bavarian bierhaus is set to open at South Bank in Brisbane this summer.

Munich South Bank will be located in the heritage-listed Allgas Building and will boast three floors and five bars, including a 150-seat rooftop bar and a 250-seat outdoor bier garden.

The Brisbane-based, multi-storey entertainment space will be the third of its kind for the Urban Purveyor Group (UPG), mirroring Munich South Wharf (Melbourne) and Munich The Rocks (Sydney).

All three venues offer an atmosphere akin to the bier halls of Oktoberfest, with the party atmosphere fuelled by imported beers as well as a revolving line-up of housed-brewed Crafty Bavarian beers by Urban Brewing Co., a division of UPG.

“Munich Brauhaus is a one-of-a-kind experience, bringing a true Bavarian party atmosphere that isn’t replicated anywhere else and Brisbane’s buzzing South Bank is a fabulous destination to include in our rapidly expanding geographic footprint.”