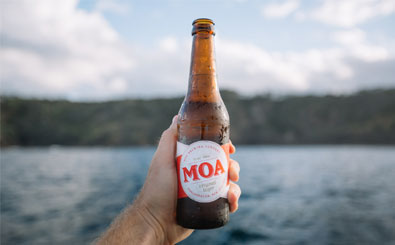 Moa has released its fifth instalment of its lambic-style sour beers program, amid positive financial results for FY16.

Moa’s audit found that the brewery has performed well in the year ending 31 March 2016, on all fronts. Volume, revenue and gross profit all grew significantly, while operating costs have decreased by more than 20 per cent.

Revenue enjoyed a 35 per cent increase to $8.15 million, while gross profit more than doubled to $2.4 million ($1.11 million in FY15). These results can be attributed in part to an increase in volume, which grew by 43 percent – in large part due to the strategy of brewing in Moa’s own brewery in Marlborough and also through a contract partner.

“Significant improvements in operating costs began to be realised mid-way through FY16, and we expect to see the full benefits of these across FY17,” said Moa’s CEO Geoff Ross.

The company also continues to expand its beer range and format, with its Special Reserves brews and limited release sours program augmenting its core range, which is gaining a reputation in Australia, including receiving 14 medals at the 2016 AIBA awards recently.

The Moa Cherry Sour Vintage 2014 and Moa Sour Blanc Vintage 2014 have just been released. Each beer has been fermented in the same barrels as the previous sour beers for a minimum of 12 months, and Moa head brewer David Nicholls explained that the bacteria and microflora within the beers allow for them to have a longer shelf life.

“We’re putting a five year shelf life on these two new brews and are expecting some really great flavours to produce as they change with age,” says Nicholls.

The Moa Cherry Sour Vintage 2014, which Nicholls describes as “the best we’ve done yet”, has a 7 per cent ABV, was brewed with a wheat base and with whole Marlborough cherries. Brettanomyces yeast gives the beer farmyard characters, and the cherries leave a tart taste on the tongue.

“Think less about hops and malt, and more about fruitiness, tartness, earthiness, and all kinds of funkiness. A decent sour develops more on the palate with each sip,” says Nicholls.

The Moa Sour Blanc Vintage 2014 is a Belgian Lambic style beer with a 6.7 per cent ABV. It strikes a balance between acidity and dryness, with hints of vanilla. It finishes clean, dry and tart on the palate.

The limited release beers will be sold in Australia in the following on- and off-premise venues: