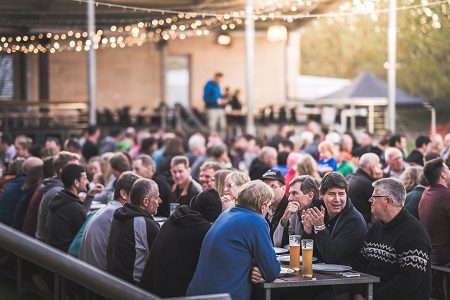 Jeremy Sambrooks explores one of the country’s premier wine regions, which in recent years has spawned a plethora of craft breweries at a concentration found nowhere else in regional Australia.

In 2008, with the help of an obliging designated driver (thanks honey), I visited all six of the Margaret River region’s breweries in a single day. In the nine years since then, one brewery has left and nine new ones have opened, making the idea of an all-encompassing, single day brewery tour a practical impossibility.

Situated in Western Australia’s south west corner, about three hours’ drive from Perth, the Margaret River region stretches from Cape Naturaliste in the north, to Cape Leeuwin in the south, with most towns and attractions located within 20km of the coast. All 14 breweries are located in the northern half of the region, with the southernmost found in the town of Margaret River, which is where we start our journey. Until the 60s, Margaret River was a support centre for dairy farms and the timber industry, like many other small towns in the area. Since then, through a combination of wine, surf and other attractions, Margaret River has become a huge tourism success. On any sunny weekend the main street can be found bustling with people shopping at the many boutique stores. While a few chain stores have popped up in recent years, for the most, the laid-back surfer town charm remains.

In the light industrial area just out of the town centre is the production-only microbrewery for the Margaret River Ale Company. Operational since 2011, their beers are on tap primarily at Settlers Tavern – known affectionately as ‘The Tav’ by locals. The brewery’s range consists of their Rockin’ Pale Ale, Great White Ale, Bombora Pilsner and Day Tripa IPA. All the Margaret River Ale Co.’s beers are keg conditioned and unfiltered for a hazy appearance and fuller mouthfeel. 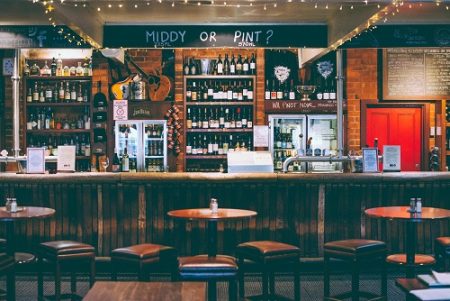 A short walk from the town centre and we arrive at one of the region’s newest breweries – Brewhouse Margaret River. Co-owner and head brewer is Andrew Dykstra, a passionate homebrewer gone pro. “Like most other brewers, the passion started in the laundry until I made myself unpopular and moved into the shed,” says Dykstra. “After a short uni course I was converted to all grain brewing. About nine years ago, a mate (now business partner) who was also into brewing suggested we make beer for a living. My partner and I bought the land and built what has become an iconic location of the Brewhouse in Margaret River. I quit my job in 2015 and now we’ve been open 12 months.”

Dykstra describes the Brewhouse beer range as “varied and sessionable” and he isn’t wrong – their large tasting paddle holds eight beers, seven of which comprise the brewery’s core range – an Australian lager, English golden ale, Czech Pilsner, Northern English Brown Ale, Oatmeal Stout, American Pale Ale, Kolsch and an American Red IPA. Seasonal and guest beers are rotated through the remaining taps, as well as ciders from The Cidery in Bridgetown. In a homage to Dykstra’s homebrewing roots, Brewhouse runs an annual Backyard Brewing Tournament, where the winner’s entry is brewed and tapped at the brewery to be enjoyed by the public. 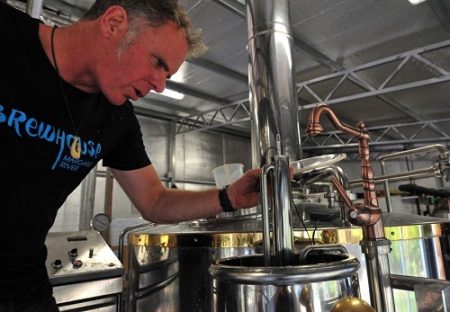 A 15-minute drive away is a brewery from Margaret River’s old guard – Colonial Brewing Co. Originally a fairly small and unassuming craft brewery, Colonial has expanded into what’s now known as the Colonial Leisure Group, which operates a sister brewery in Port Melbourne, Victoria as well as a number of hospitality venues across the country. The head brewer at Colonial Margaret River is Ryan Nobbs, who started at the brewery as a volunteer, before working his way up the ranks until he was crowned head brewer at the ripe old age of 23.

Colonial’s core range is comprised by their Draught (Kolsch), Small Ale (3.5 per cent session pale), Pale Ale, and an IPA made from exclusively Australian hops and malt. Current seasonal beers are Albert pale ale, a witbier and a strong porter which is poured from a nitro tap for a cascading effect and creamy head. The Colonial’s core range beers are available nationwide in cans along with Bertie apple cider. 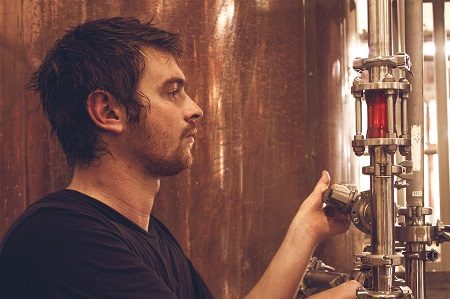 Heading north, the next stop is Cowaramup Brewing Company, a craft brewery that’s unusual for its focus on English style beers. Have a chat with Cowaramup’s brewer-co-owner Jeremy Good and you’ll see why – he is truly passionate about British ales. Good’s enthusiasm has rubbed off on many of his former employees who’ve gone on to have successful brewing careers. Cowaramup produces a Hefeweizen, Lightsign Summer Ale, Special Pale Ale (an ESB), India Pale Ale (English style, of course), Porter and a multi-award-winning German style Pilsener.

Ross Terlick is one of the brewers from Good’s stable – he was working as a bartender at Cowaramup when he won the Beer & Brewer award for Beertender of the Year in 2012. “While at Cowaramup I came to appreciate good beer and started home brewing,” says Terlick. “I moved up to bar manager, then managed to make my way into the brewhouse by doing the many menial cleaning jobs that came up. An assistant brewer job then opened up at Cheeky Monkey and I jumped across.” Now head brewer, Terlick brews Cheeky Monkey’s beer range of Blonde Capuchin (blonde ale), Old Reliable (pale ale), Traveling Monk (session red ale), Hagenbeck (Belgian IPA), a couple of ciders and a regular run of limited release beers, the latest of which is Imperial Monk – a red IPA. All Cheeky Monkey’s beers and ciders are available in cans. 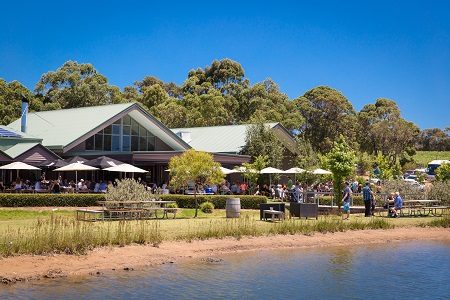 BREWING ON THE FARM

The next brewery on our tour used to be the western front of Young Henry’s, but has since established itself as a stand-alone venture called The Beer Farm. The Beer Farm doesn’t hide its dairy farm origins and the original buildings remain intact – the main entrance was the old creamery, the roundhouse (where the cows were milked) is now home to a 20 hectolitre brewhouse and the hay shed has become a tavern and tasting bar, which overlooks the expansive and picturesque property. The kids won’t mind going to this brewery – they can have fun on the 50 metre water slide while the adults enjoy a bevvy or two. Head brewer Josh Thomas crafts a range of quality beverages that are separated into the brewery’s two ranges: Session – West Coast Lager, Australian Bitter, Brown Ale and Western Cider – and Specialty – India Pale Lager, Naked IPA, La Maison Saison and Nitro Stout, as well as the occasional special release beer. 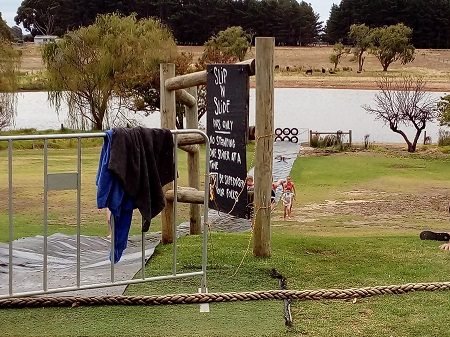 The Beer Farm slip and slide

The region’s smallest commercial brewery is the ‘nano-brewery on wheels’ found at The Grove Distillery. While spirits are the venue’s primary focus, their four beers can be sampled in the café. Nearby is Bootleg Brewery, which having been open since 1994 is the region’s oldest brewery. For the last few years, Bootleg’s head brewer has been Ryan Nilsson-Linne. “I got a job at Cowaramup as their first employee in 2006 doing their grounds work, pouring beers and helping out wherever I could,” says Nilsson-Linne. “This grew my passion for hand-crafted beer more than ever before, so when a job came up at Bootleg in 2007, I jumped at the opportunity with open arms and learnt the trade at Margaret River’s pioneers of the industry. My favourite Bootleg beer is the Speakeasy IPA and currently, The Flaming Youth Gose, which is a delicious summer quaffer.” Other Bootleg products include the Tom’s Amber, Sou’ West Wheat, Prohibition Pils, Raging Bull strong ale and Prinsep Cider – all are available in bottles.

A couple of kilometres from Margaret River’s oldest brewery is one of its newest – Black Brewing Co. Taking over the site formerly occupied by Duckstein (who are still open at their original Swan Valley brewery), the brewing team at Black is headed by Paul Gasmier, who helped install the brewhouse over 10 years ago, while working as head brewer for Duckstein. Gasmier now uses the brewhouse to make Black’s six beers: Fresh Ale (a light, refreshing ale), Rice Raaager (rice lager), Pale Ale, XPA, Saison and Bao Bao Milk Stout. All are brewed with sessionability in mind and are available in stylish jet black bottles.

The next stop on our tour is Bush Shack Brewery, not far from the town of Yallingup. Bush Shack specialises in flavoured brews, such as their Chilli Beer, Strawberry Blonde and Twisted Lemon Lager, as well as a couple of ciders and several wine-based flavoured drinks. The pick of the range is their Chocolate Beer – a milk stout that contains no chocolate and gets its flavour from dark malts and its subtle sweetness from lactose.

Another short drive and we arrive at the seaside town of Dunsborough, which is home to a couple of excellent beer venues – The Pour House and Clancy’s Fish Pub. There’s also a brewery in town – Occy’s – which pours guest beers from Australia and abroad as well as a large range of their own lagers and ales. All their beers are five per cent alcohol or under and made for easy drinking. 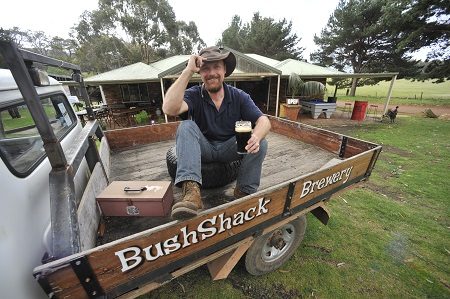 Eagle Bay Brewing Co. is located in the region’s north-western tip, overlooking Cape Naturaliste. Owned and operated by third generation local farming siblings Nick, Astrid and Adrien d’Espeissis, the property is also home to a vineyard and a lovely restaurant. Nick d’Espeissis is the head brewer, having moved back home after brewing for 4 Pines in N

ew South Wales. All Eagle Bay’s beers are bottled and available in liquor stores across the state. Their core line-up consists of a Vienna Lager, Mild Ale (hoppier and lighter than the traditional English style), Kolsch, Pale Ale and ESB. Brewer’s series beers are released seasonally, including a popular Cacao Stout, made with cacao husks from local chocolatiers, Bahen & Co.

Heading back to Perth on the Bussell Highway, we reach the town of Busselton, which is as Far East as you can go while still being in the Margaret River region. Busselton is a large seaside tourist town and its premier attraction is the mile-long, heritage listed Busselton Jetty – the longest timber-plied jetty in the southern hemisphere. The town is also home to two production-only breweries. Named after the jetty, Blue Mile Brewery’s beers are made by Jason Credaro, formerly of Little Creatures in Fremantle. Blue Mile’s main products are 24 Cannons Pale Ale and Red Belly Red Ale, though Credaro has been experimenting with some special brews, including a Lambic Pale Ale which combines lambic sourness with citrusy hops. The other brewery is the brand new Rocky Ridge Brewing Co. – based in a dairy farm 15 minutes east of town – who will release their first beers in the first quarter of 2017. Both breweries are set to open cellar doors as part of the Busselton foreshore redevelopment.

Busselton is also home to the South West Craft Beer Festival, held annually in February, where you can try beers from all the region’s breweries in one convenient location.

An abridged version of this article appeared in the Autumn Issue of Beer & Brewer, subscribe to Beer & Brewer here.