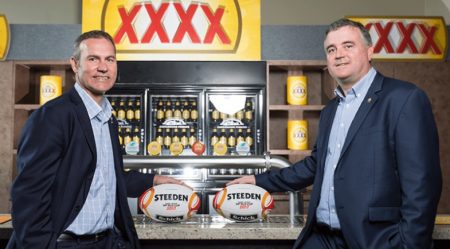 By Andy Young, Editor The Shout

Lion has made changes to its sports sponsorship deals, signing up to two new partnerships and ditching one of those it had in place.

The brewery has pulled the plug on its long-term sponsorship of the Wallabies. As part of the re-assessment of its sponsorship priorities, Lion will end the Hahn SuperDry deal with the Australian Rugby Union.

SuperDry has been the official beer of the Wallabies for around 15 years, but as the brewer closes the door on rugby union, rugby league looks sets to take advantage.

Lion has also announced that it will be the official beer partner of the 2017 Rugby League World Cup (RLWC2017), which will take place in both Australia and New Zealand. Lion’s XXXX Gold will be the official beer of the RLWC2017 and Lion will receive pourage rights for the beer and cider categories at all RLWC2017 matches played in Australia and New Zealand.

XXXX GOLD and other Lion products will be available in hospitality suites and functions at all RLWC2017 fixtures played across the co-hosts, plus official events held throughout the five-week tournament period.

Matthew Windsor, Lion Customer Director for On Premise, is thrilled about the partnership saying: “We are really excited to bring the number one mid strength beer in Australia to adult Rugby League World Cup fans. Mid strength beers are a popular fixture in venues across both Australia and New Zealand, and Lion are proud to bring XXXX GOLD to rugby league fans to enjoy responsibly.”

Andrew Hill, RLWC2017 CEO said: “Lion has been long-time supporters of rugby league in both Australia and New Zealand at all levels of the sport, and we are pleased to welcome them as the Official Beer Partner of this year’s Rugby League World Cup.”

“Lion’s popular XXXX GOLD beer has been associated with elite domestic rugby league competitions for over two decades and through this partnership, can now add the game’s premier global tournament to their portfolio. We look forward to working with Lion to deliver the best ever Rugby League World Cup.”

And in a further boost to rugby league, Lion is set to return to the shirts of the New South Wales State of Origin team. Earlier this month Carlton & United said it would no longer continue its Victoria Bitter shirt sponsorship of the NSW Blues, but Lion has come into that gap and will re-activate its Tooheys New deal with the Blues.