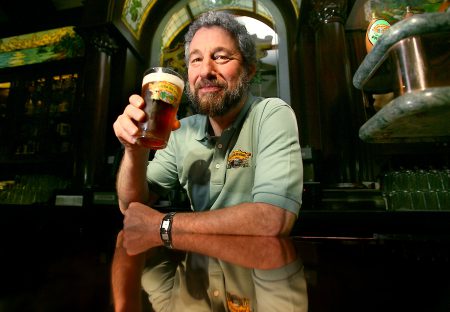 Ken Grossman, the Founder and Owner of Sierra Nevada Brewing Co, is in Australia for Good Beer Week and GABS, so Beer & Brewer stole a bit of his time to chat about his 40 years in the brewing industry and what his hopes are for the future of Sierra Nevada Australia.

B&B: Australia is obviously behind the US in craft beer but the category is enjoying strong growth. Do you have advice for new craft brewers coming into the market?

KG: I think the biggest one is to focus on quality and to study their art. Brewing it really a combination of a fair amount of science but also a fair amount of art, so to be a great brewer and survive long term you really need to understand both the scientific aspects of what it takes to make great beer batch after batch and then blend that with the artistry of creating brands that have appeal and character for the consumer.

Experimenting is great if you have a solid brewing background and understand the subtleties of brewing I think you can be a better experimental brewer. So just because you’ve got a scientific background it doesn’t mean you can’t be experimental, it really goes hand in hand.

B&B: What do you think you think will be the next major trend in craft beer? What can brewers do to make sure they stay relevant to consumers?

KG: From my short time here it appears that Australia is quite progressive and a bit like the US market although there are some differences that are driven by things like tax rates, the US marketplace is not penalized for higher alcohol in beer so IPAs are more than 50 per cent of our craft segment right now, and I’m not sure if it will continue to grow like that in Australia because of differential in pricing of higher hopped and higher alcohol beers, but I think the American market took a while to turn into a hop forward market, so I assume that Australia will follow in a similar fashion.

B&B: What can brewers do to stay relevant to consumers?

KG: I think staying in touch with consumers. What happened in the US and I see it happening here is having the ability to sit with your consumer and drink beer in a pub or a tavern and just understand where the consumers’ tastes are going, because they are changing quite a bit. We’ve seen it happening in the US and I assume it will happen here. So, you can either be one step ahead of them or certainly just be engaged with what they want to drink.

B&B: How are things going for Sierra Nevada in Australia? What are the hopes for the future of the brand over here?

KG: They’re going well. Certainly, there is a lot more competition on the shelves today than when we started six years ago, but our hope is to continue to grow our brand in Australia and other places around the world, as well as in the US.

So, we’re out here on my first trip to Australia to check out the beer scene. My brother gets over here a couple of times a year but it’s my first time and there are a lot of amazing things happening. I’m sitting at the Stomping Ground brewery right now, I have just met with those folks and sampled some beer and had lunch. I’m here for Good Beer Week and will be here for the whole week, it was my reason for coming over now.

B&B: Do you have any special edition or new brews coming to Australia? What can Australian consumers look forward to from Sierra Nevada?

KG: All the time! We’re doing a wide range of innovation and bringing back some classic old styles of beer and reinterpreting them as well as barrel aging beers with unique ingredients. So there’s a range of innovation that’s happening, we’ve been doing it for many years and will continue to do that.

B&B: Is Sierra Nevada all shipped from the US? Are there any plans to brew under license over here?

KG: It currently is all shipped from the US. Brewing under license has it’s drawbacks. We’ve always been a brewer that wants to control all the aspects of the brewing process. We are looking at potential partnerships but at this point we’ve got some concerns about the facilities and the brewers, so I would say that we’ve got no immediate plans to brew under license.

B&B: Is there a particular focus on the on- or off-premise for Sierra Nevada in Australia?

KG: A little bit of both. We feel that you need to have both ways to connect with the consumer, so we don’t have a focus but we want to do brand building both on-premise and off-premise.

Craft beer has enjoyed huge success in the US; can the growth continue? I think it will. Certainly, there are so many breweries now and there is a little bit of a slowing in the growth rate. The segment can’t continue to grow at 10, 20, 30 per cent forever otherwise the numbers wouldn’t add up, so it’s starting to taper off, but in so far as the future of craft it’s still good and there will be continued growth in the segment.

KG: It’s a business decision for some small breweries to sell out. It does cloud the segment a bit as far as the ownership of the brands and there are also craft lookalike brands that the big producers have been producing for many years. We feel strongly that the independents and the craft brewer in their brewery is important, it’s what got the whole movement started and I’ve been doing I now for nearly 40 years and feel that a part of the reason that the segment was so successful is because of the passion of the brewers who got into it, so as the bigger companies acquire them, certainly some of that could be lost.

B&B: Tell me a little bit about how you got your start in the industry:

KG: I started as a home brewer back in the late 60s. I had a neighbour who was a very successful homebrewer and home winemaker as well as a scientist, he was a meddler who worked on rocket engines. But he lived a few doors down from me and his son and I grew up together, so I was around his house when he brewed every weekend, and so the alchemy of what he was doing connected with me. So, I started studying chemistry and homebrewing in the late 60s and early 70s and then in the late 70s I opened the Home Brew Supply Store in Chico, California, where I sold supplies to homebrewers and winemakers. After doing that for a couple of years I decided that I wanted to be a professional brewer, so I wrote up a business plan. At that point in time the US brewing industry was really at a low point. There were about 40 breweries left in America and that included all the largest and the smallest, and so I thought there was a good opportunity for unique beers to find a foothold and to field the consumer who wanted to drink something different to the light lagers that were available at the time. Once we had the business plan, we tried to raise money and really couldn’t so we ended up borrowing from family and friends and building all the equipment myself and started commercially brewing in 1980.

Back in that day, the beers that were available to the consumer were really limited to one style, which was a light lager style with not a lot of character or flavour, so we brewed a bottle condition which was unique, very hoppy pale ale with a lot of cascade hops, so we produced a beer that appealed to drinkers who wanted to expand their horizons.