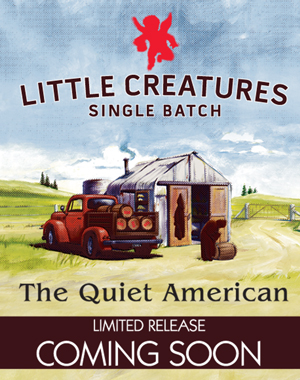 Little Creatures has released its latest single batch: a hybrid ale called The Quiet American. If you’re a hops fan we suggest you run, not walk, to your local stockist.

Editor Note: According to the Little Creatures blog they will be letting everyone know where they can get their hands on the brew via their Facebook page or via Twitter.

Even better they‘ll be tapping the first kegs of the Quiet American next Friday, April 20th, in Freo from 4pm or at the Dining Hall in Melbourne from 4.30pm and they want to shout you a taste. Get on it.

The Quiet American (details from the Horse’s Mouth)

Hops:
A showcase of new season US Cascade and Chinook

Ferment:
A warmer Belgian ferment to encourage the ester and higher alcohols to shine.

Presentation:
It presents with an orange hue, nice tight white foam and a lively carbonation.

In a Nutshell:
A mash up of Belgian and American flavours and brewing styles, influenced by the quiet talents of the Trappist monks while celebrating the loud and proud US IPA’s through the use of the new season American hops.

Enjoy this ale in moderation with a mate or even keep it all for yourself.

The Quiet American will be available as of 19 April 2012, in pint bottles from the brewery, then nationally in the following weeks.