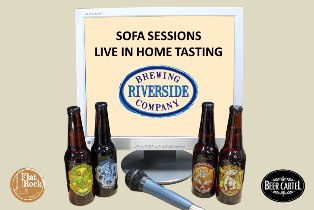 Australian beer tasting events are very popular, with venues like The Local Taphouse in Sydney and Melbourne at the forefront of this growing trend thanks to their ‘Ale Stars’ evenings. These events have had brewers from Australia and overseas attend to talk about their beers, with brewers even skyped in from abroad, where distance would otherwise make their participation impossible.

Taking this idea Beer Cartel is collaborating with Flat Rock Brew Cafe and Riverside Brewing Co to create a tasting event with a twist. Instead of consumers having to visit a specific location to attend the event, the tasting will instead be broadcast live over the internet, with the beers pre-ordered online through Beer Cartel, allowing patrons to take part in the tasting from the comfort of their own home.

The event will be held on Tuesday 19 August at 7pm and will be broadcast from Flat Rock Brew Cafe in Naremburn, Sydney – where a limited number of spots will also be made available. It will utilise Beer Cartel’s website and will distribute beers to people across Australia that want to take part in the event. A live video feed will be made available to participants so they can taste and learn about the beers from Riverside’s Head Brewer, Dave Padden.

To participate online in the event, consumers will be required to purchase a Riverside tasting pack on the Beer Cartel website. This will include four Riverside beers to be featured during the tasting; 55 Pale Ale, 44 Amber Ale, 77 IPA and 88 Robust Porter. Three of these were recently awarded medals at the Australian International Beer Awards. The tasting pack is priced at $25 excluding postage, and is available here.

For those looking to attend the event in person tickets can be purchased by calling Flat Rock on (02) 9460 6696, or emailing here.