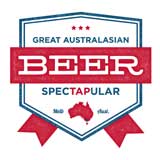 Organisers of the Great Australian Beer Spectapular (GABS) have released a list of the beers that are being brewed specifically for the event, and beer lovers are in for a real treat.

The list, which runs to seven pages long, shows a startling array of beers from around Australia, and overseas – and with nothing off the table in terms of ingredients, there are some really unusual beers in the offing for the festival.

That’s just a tiny sample of the beers – and more info will be available soon on the GABS website.

To sample these beers, you’ll need to get along to GABS – held in the Royal Exhibition Building, Melbourne, from 23-25 May, 2014.