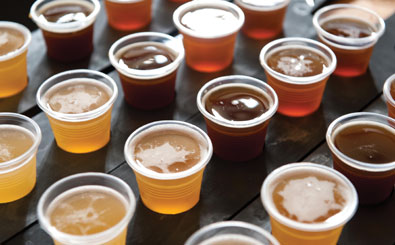 There will be 300 beers available, including 118 ‘Festival Beers’ specially brewed for the event by brewers from Australia, New Zealand, Japan, Italy and England.

The Beer & Brewer People’s Choice Best Festival Beer of GABS will be hotly contested again this year, so after tasting your way through a selection of festival beers from Container A and B Bars, make sure to vote for your favourite here. You could even win five cases of beer just for voting!

Previous winners such as last year’s La Sirène Praline have gone on to enjoy incredible success, with Praline coming in at number five on The Local Taphouse’s Hottest 100 Aussie Craft Beers of 2014 and number nine on the Critics’ Choice Top 100 Beers of 2014.

“We thought when we made La Sirène Praline that it would be a novelty that would be well-forgotten, let’s just say that it couldn’t be further from the truth. It goes to show you that sometimes as brewers what we think people are after and what they will truly appreciate and get behind are sometimes different,” said La Sirène head brewer, Costa Nikias.

GABS will head to Sydney’s Australian Technology Park on Saturday, 30 May and the Beer & Brewer People’s Choice Best Festival Beer of GABS will be announced there at the end of the second session.

Tickets to Session 3 (Saturday 12-5pm) of GABS Melbourne have now sold out. Tickets for all other sessions are still open but pre-booking is strongly advised. To buy tickets to GABS Melbourne or Sydney, click here.