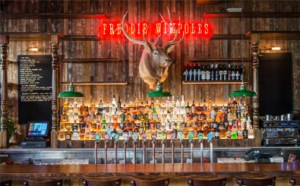 Beer and whisk(e)y were the big winners at this years’ Time Out Melbourne 2017 Bar Awards, with the winners of Bar of the Year and the People’s Choice Award specialising in both.

The People’s Choice award was taken out by St Kilda’s American-style roadhouse bar Freddie Wimpoles, which specialises in craft beer.

With 13 rotating craft beers on tap, New York-style deli food, a welcoming hunting lodge with neon-lit American diner atmosphere, a poolroom and a jukebox, this is one venue worth checking out.

Russell Street institution Whisky and Alement was named Bar of the Year with the well-loved venue, which has been introducing Melbourne whisky fans to rare and unique drams since 2010, also taking out the award for Best Bar Team.

According to Time Out’s National Food and Drink Editor, Emily Lloyd-Tait, the bar is iconic for being the first to really champion whisky in Melbourne, as well as curating an excellent craft beer collection.

“They seek out limited edition single malts, knew to hoard Japanese whiskies before the boom, and always offer warm service to novices and experts alike,” she says. “Drinking here is both and education and a pleasure.”

Bartender of the Year went to Joe Jones of Romeo Lane, with the bar also named Best Cocktail Bar for 2017.

The Time Out Legend Award was given to Cherry Bar in recognition of its dedication to Melbourne’s live music scene.

“We’re honouring a rough-and-ready rock‘n’roll bar that has helped make Melbourne the country’s live music capital, and that for the last 17 years, has pushed for positive change in the music industry,” says Time Out’s Melbourne Editor, Rose Johnstone.

Among the bars to open in Melbourne in the past year, Loretta’s at Bluebonnet BBQ in Fitzroy North was named Best New Bar.

Designed to pinpoint a future star of the Melbourne bar scene, the Hot Talent Award was given to Bar Americano bartender Liana Oster.

BAR OF THE YEAR
Whisky and Alement WINNER