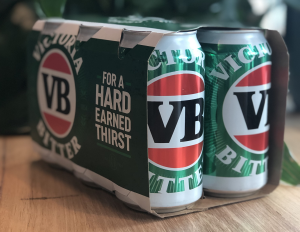 Carlton & United Breweries (CUB) has stopped using plastic six-pack rings on cans at its Abbotsford brewery, meaning more than 25 million of them will no longer enter the environment each year.

The brewery will replace the rings with cardboard packaging, which will make its way into store over the coming weeks.

CUB CEO Peter Filipovic said: “Beer lovers can now enjoy their favourite beers from the can without worrying about their damaging effect on the environment.

“We’ve been around for 180-odd years. We’re determined to be around for another 180 and more, and our sustainability program is critical to that.

“Last year we made a commitment that 100 per cent of our products will be in packaging that is returnable or made from majority-recycled content by 2025. The decision to stop using plastic six-pack rings is a major step towards achieving that.”

The move follows a similar one at CUB’s Cascade Brewery in Tasmania last year and CUB has also said it will stop using 137 tonnes of plain shrink wrap each year on slabs of cans in coming weeks.