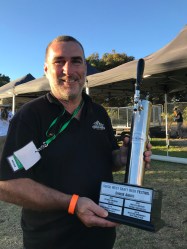 It is the brewery’s second most popular beer.

Earlier in 2018, the brewery purchased a bench top can seamer from the USA. It is the 40th one to be made and the first model of its kind in Australia.

On 25 March, Cowaramup Brewing Company will hold its second annual hop harvest, which is open to the public. Eight different hop varieties will be available for homebrewers and other enthusiastics to collect for themselves.