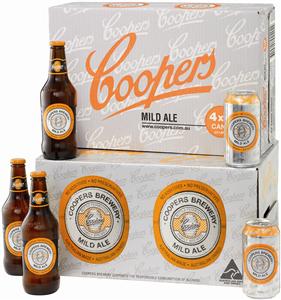 Increased sales of Coopers Mild Ale have enabled the brewer to overcome the impact of Australia’s milder than normal start to summer.

Sales of the mid strength Coopers Mild Ale soared 21.6% for the period from July 1 to December 31, 2010 over the previous year and have enabled Coopers to enjoy an overall 4.7% increase in sales.

Coopers Chairman and Marketing Director, Mr Glenn Cooper, said cool summers were not enjoyed by anyone in the beverage or related industries.

“However, the rising interest in Mild Ale around Australia has enabled us to overcome the impact of the cooler than normal start to summer and still report good growth.

“Sales of Mild Ale in cans have been particularly strong and are up 79% on the previous year.

“However, we have also recorded a 7.7% increase in sales of Coopers Best Extra Stout.

“Stout is normally a winter drink, but we think the cooler start to summer has extended its season and people have been enjoying it later in the year.”

Mr Cooper said sales of Mild Ale had been particularly strong in States where mid strength beers were most popular, Queensland and Western Australia.

Sales of Mild Ale rose 31% in Queensland and 58% in Western Australia, which unlike the rest of Australia endured a hot start to summer. Mild Ale sales in Victoria rose 23%, NSW 24% and the Northern Territory 9.2%.

“While a number of other beverage producers have reportedly been affected by the seasonal slowdown, we are delighted that we have been able to increase our overall sales by 4.7%,” Mr Cooper said.

“It shows interest in Coopers’ products is continuing to grow around Australia.”