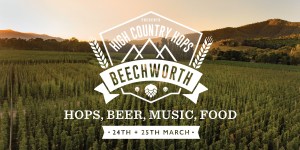 Brewers and other producers will be launching a range of unique products at the festival. Bridge Road Brewers will be bringing its wet hop beer The Harvest to the festival, as well as a dry-hopped gin made in collaboration with Reed & Co Distillery called Lugupin, which is made with a double serve of Galaxy hops, dessert lime and Mt pepper.

Blizzard Brewing Co will be launching its new hop beer made exclusively with freshly harvest wet Galaxy hops from the Rostrevor Hop Gardens in Ovens, while King River Brewing has collaborated with a local artisan hop farmer to release a wet-hopped Chinook SMaSH IPA (Single Malt, Single Hop) at the festival. There will also be beer-flavoured ice cream from Gundowing and beer-washed rind Milawa cheese.

Local food producers, musicians including The Kissin’ Cousins (Sunday) and The Beez (Saturday), as well as plenty of activities for children, will also be on offer.

To find out more, visit the Bridge Road Brewers’ website or head to Beer & Brewer’s Facebook page enter the giveaway.