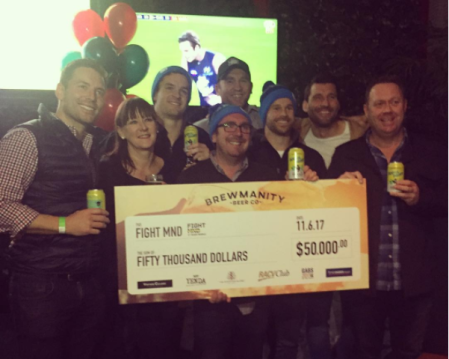 Brewmanity has raised $50,000 for the Cure for MND Foundation following successful Good Beer Week and GABS events. This brings the total amount raised to date up to $150,000.

For Good Beer Week this year, Brewmanity and Colonial Brewing Co set themselves the challenge of brewing an Eisbock, which they called Dr. Freezemeister. They also had Diesel play at their Beer vs Beast event.

One hundred per cent of the proceeds spent over the bar on the day went directly to the Cure for MND Foundation.

David Neitz, the Director of Brewmanity, told Beer & Brewer that what they’re doing is just a small contribution to what the greater foundation is doing globally.

“The foundation has put $15 million into research, which was never going to happen without the efforts here in Australia. And then from a little foundation here, it is having a global reach and a global impact for sufferers around the world,” said Neitz.

“A hell of a lot more needs to be done, but it’s a great start. And the great thing about the foundation is that the money is being used in a really effective way, so that’s really exciting.”

Brewmanity was founded by four beer loving mates that wanted to make a difference. Inspired by a mate, Neale Daniher, an MND sufferer and the Founder of the annual Big Freeze event, which was held earlier this week and has so far raised $4.6 million dollars for MND research.

All money raised through the events Brewmanity hold plus a portion of the proceeds from beer sales goes to the Cure for MND Foundation.

“The bulk of the funds we have raised have been through the events we’ve been having, but now that we’ve got our Social Beast cans in Vintage Cellars and First Choice Liquor we’re hoping that we can get a bit more volume and raise more funds through those sales as well,” said Neitz.

“So that’s a part of the contribution and we’re hoping that as we move forward, that part of the fundraising is a bigger portion of the donated funds.”

In other news, Brewmanity are collaborating with urban beer bar, Hopscotch at Southbank in Melbourne, which has just put in a new three hectolitre brewing system.

They will be brewing an oyster stout named OMG What the Shuck and it will be the first beer brewed out of that tank.

“They’ve just put in a three hectolitre system so we’re about to put together a lovely little Oyster Stout, which we’re all excited about.

“The oyster will give it a bit of saltiness and we’ll get a bit of caramel from the malt – it should be a lovely drop.

“Effectively we’re just making it out of that venue. It will be going straight from the tank to the taps and it will be the first beer that they will do out of their tank, so it will be an exciting little venture.”