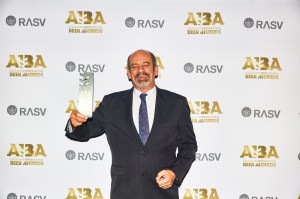 At the 2018 Australian International Beer Awards (AIBAs), it was Beerland Brewing’s draught Wheat Beer that received the coveted award of Champion Australian Beer. Beer & Brewer caught up with Ken Arrowsmith, head brewer at the Northbridge Brewing Company and the man behind the beer.

Q: HOW DID IT FEEL TO WIN THIS AWARD?

It felt very good. I’ve been in this business a long time and I’ve seen the awards come and go. It’s nice when your number comes up.

Q: TELL US ABOUT THE BEER.

It’s a very authentic German-style Kristalweizen, a traditional filtered wheat beer. We went down all the usual authentic routes in terms of ingredients, yeast and carbonation. It’s pretty consistent and an accurate representation of the style. What particularly put it over the edge to get the Champion Award who knows. It’s in the eyes of the judges. You try to make good beer every time you make a beer. I’m very pleased to be recognised in this way.

Q: TELL US ABOUT BEERLAND AND NORTHBRIDGE.

We started off with a brewpub in Northbridge about three and a half years ago. And then we opened the second one about six months ago. We just run the two brewpubs and all our beers go over our bars. We tend to keep our five core beers on tap all the time – the Wheat being one of them – and have a seasonal rotational beer, a single batch that’s split between the two breweries. When it’s gone, it’s gone. We’re constantly producing something new for our aficionados, but our core range does most of our trade.

Q: HOW HAS THE BEER SCENE CHANGED OVER YOUR YEARS IN THE INDUSTRY?

I’ve been in brewing for 38 years. I saw craft beer come from the early 80s, with the first wave of craft in Australia – Blair Haydon and The Lord Nelson back in those days. I got involved in what was called boutique beer in that first wave, in Western Australia with the predecessors to Matilda Bay, and I opened a brewpub in Adelaide.

The really exciting thing has been the last 10 years when craft beer has really gotten its second wind. I still can’t believe the number of breweries opening. Every couple of days you hear about another. I don’t know when we’ll achieve saturation, but the American experience suggests that there’s always room for one more. Over the last three to four years, the competition for shelf space and tap points has become insane. Brewers are going to find things tough unless that have that magic buzz – you either go big or you’re destined to be hand to mouth.

There’s a lot of proliferation of styles and breweries. The borderlines between beers and other beverages are starting to blur, particularly when you think about the ingredients that people are putting in their beer.

Q: WHAT’S YOUR APPROACH AT BEERLAND?

We’re considered the safer start-up. We’ve got a guaranteed outlet for our products. I think the way breweries are building venues into their products is key. You need somewhere to sell you beer. The directors in our group are long term pub people, so this is right up their street.

In our pubs, we run an open bar. We’ve got 40 taps in our venues, they’re not all our beer. We run a whole range of other craft beers, so we have a duty to look after them on behalf of their brewers. You might receive some well hyped beer and wonder what the fuss because after one taste you can tell it wasn’t treated very well on the way to the bar. These are the growing pains for breweries distributing more widely: it becomes harder to maintain quality.

But in the end, it’s about product knowledge and care. We’ve got an emphasis on training for staff, so that they can sell the beer but also care for it. Education in beer husbandry is incredibly important for anyone wanting to sell craft beer. As you sell beer in more diverse environments, it becomes incredibly important that the people at the pointy end know about your product.