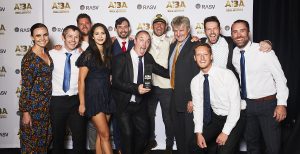 The 4 Pines team celebrate their win

Hosted by the Royal Agricultural Society of Victoria (RASV), the AIBA presentation took place at The Peninsula, 14 Harbour Esplanade, Docklands, Melbourne on Thursday 16 May.

With the brewing landscape evolving over time, this year saw two new trophies introduced into the awards. Best Fruit Beer was awarded to Rodenbach Caractere Rouge, while and Best Wood or Barrel-Aged Beer went to Captain of the Coast, a beer from the United States.

“The AIBA is the largest annual beer competition in the world, offering exhibitors the opportunity to benchmark their beer against industry standards to stand among some of the most talented brewers in the world,” says Paul Guerra, CEO of RASV. “With almost 2,600 entries from more than 400 breweries across 26 countries, 2019 marks the biggest year in the awards’ history and we look forward to seeing this growth continue.”

A full list of Champion Trophies and Medals can be found below:-