William Smith & Sons has celebrated a big win at the 2018 Australian Cider Awards, taking home four of the 10 awards on the night, including Best in Show and Most Successful Larger producer.

The Willie Smith’s Kingston Black Cider was named the best cider in the show, and also took home the Best Traditional Cider and Best Australian Cider, with a score of 93 in the Traditional Medium Sweet class.

“I would like to thank everybody for tonight, it’s a hugely proud moment for me to receive this on behalf of the team,” says head cider maker Tim Jones. “I know what goes into these shows, particularly behind the scenes. So on behalf of Willie Smith’s I would like to thank Cider Australia, it’s really growing and is very exciting. We are starting to get recognised overseas and it couldn’t be a better time for Australian cider.

“I would like to thank everybody that entered, at the end of the day we’re really passionate about pushing the category forward as a whole and no-one wants to be doing that on their own and no-one is because we have our own little community. So on behalf of Willie’s thank you to everybody who entered.

“Finally I really must thank the guys in the production team at Willie Smith’s. None of us make a cider by ourselves and a lot of work and contribution from the cider-makers at Willie Smith’s have gone into all of these ciders and what we have made over the last few years. So to those guys, thank you so much, I couldn’t be prouder.”

Jane Anderson, Executive Officer, Cider Australia, added: “This is an exciting time for the cider industry in Australia. It’s great to see more Australian producers and their ciders scoring higher than ever before in this year’s judging. While fewer entries scored medals, the cider making profession in Australia is becoming more skilled and competitive with more gold medals awarded.

“With the quality of cider produced in Australia constantly improving, our Australian producers have also been winning medals at international shows in the US, UK and the World Cider Awards.”

Willie Smith’s co-owner Sam Reid said the prestigious award was a great reflection of the entire crew at the Huon Valley business.

“I’m stoked our Kingston Black won Best in Show – broadening the category with these purpose grown apples is really important. We hope to see these heirloom apple ciders on more and more wine lists of progressive venues in the coming years.

“What I’m perhaps most excited about is our flagship product, Willie Smith’s Organic, won a gold and we were awarded ‘Most Successful Larger Producer’ which demonstrates the overall quality of the range and the great work our cidermaking team are doing.” 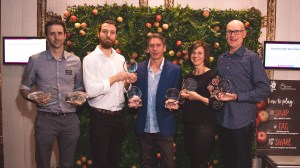 Prior to the awards Cider Australia launched a world-first trust mark for Australian cider producers, which will help consumers identify ciders which are made with 100 per cent Australian fruit.

Cider Australia said that domestically the trust mark will help raise awareness among consumers that they are supporting Australian fruit growers, boosting Australian jobs in the craft cider making industry and helping regional communities in the process. Cider Australia estimates that approximately 30 per cent of drinkers will choose to drink a premium cider made with 100 per cent Australian-grown fruit if they have the choice and can identify these ciders.