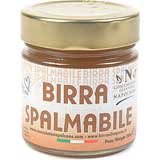 Now, we’re not entirely sure if this is completely and utterly awesome, or just a really, really bad idea… but someone in Italy decided that the world was ready for something new. We’ve survived Justin Bieber, killer typhoons and the Great Bird-Flu Scare of ’09 – and we’re sure hoping that the world as we know it will survive ‘Spreadable Beer’.

Called Birra Spalmable (you know… becuase it’s Italian…) it comes in two flavours – Omid Dark Ale and Greta Blond Ale (pictured above) – thanks to the sharp minds at Italian chocolate makers Napoleone and the Alta Quota Brewery. Its makers say that it’s not just a spread, but that it is actually a solid, non-liquid beer.

We’re not sure that we’re all that keen to try it out – but, on the bright side, having a jar of this in the cupboard will make a beer for breakfast an entirely palatable suggestion.

As far as we can tell, it’s only available in the UK at the moment, at eight quid a jar (about $15,000 of our puny Australian dollars). If you do end up trying it out, drop us a line and let us know how it worked out for you.