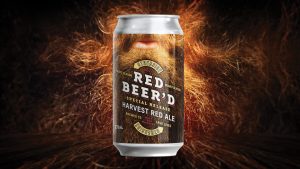 The brewery has created a specially brewed edition of its Harvest Red Ale and called it Red Beer’d. Proceeds from each can will help Beard Season to fight melanoma – Australia’s ‘national cancer’.

Beard Season was founded by Jimmy Niggles after the death of his friend Wes Bonny from melanoma. From June until August, thousands of men are encouraged to grow their beards as a way of starting conversations and encouraging as many people as they can to visit a GP or dermatologist for a #BeardSeasonSkincheck. It is estimated that Beard Season saves an average of a life a week. The not-for-profit Beard Season funds free pop-up skin check clinics where they are needed most to dramatically improve rates of early detection and awareness.

Otherside Brewing co-founder David Chitty met Niggles at the Emergence Creative festival in Margaret River and decided to get involved.

“We thought we could use the beer and Jimmy’ profile to raise awareness,” comments Gav Feilding, brand and communications manager at Otherside. “He’s really gotten the word out. We’re making 200 cases, so it’s very limited and it will be available on the east and west coast. All the fundraising that we do will go to help his existing program. He’s been growing his beard for years. His goal is to reach $1m and when he does that, he’ll shave his beard off. He’s projected to shave his beard off in October so there might be a big event around that.”

Red Beer’d has a 5.4% ABV and is generously hopped, with melon and citrus notes up front backed with raisin and plum characters.