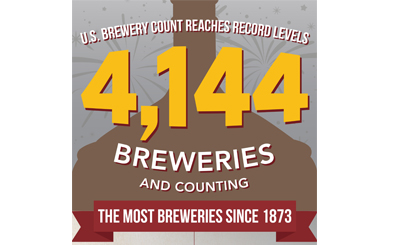 More than two breweries are opening each day in the US, with the total number of US breweries reaching a record high of 4,144 last month, topping the historic level of 4,131 breweries in 1873, according to the Brewers Association.

“Beer has always been a hallmark of this country and it is even more apparent today as America’s beer culture continues to expand.”

“Craft breweries are a part of their communities, operating in neighbourhoods and towns, returning us to a localised beer culture,” added Watson.

“There are still thousands of towns currently without a brewery, but with populations potentially large enough to support one. With beer lovers continuing to desire more full-flavored, innovative options from small and independent local breweries, ample opportunities exist for well-differentiated, high-quality entrants in the marketplace.”

For an interactive timeline of US breweries from 1873-2015, click here.

For a breakdown on how the beer industry looked in 1873 versus 2015, check out the graphic below.