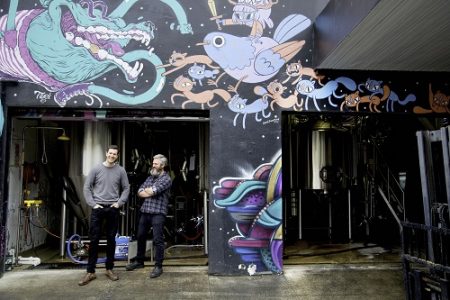 Garage Project’s win is earned through its medal-haul – four Golds, nine Silvers, and 13 Bronze – all determined through blind judging with an expert panel. Garage Project also brings home the trophy for Best Flavoured and Aged Beer, for its Cabbages and Kings Imperial Oyster Stout.

Garage Project was established in 2011 by Jos Ruffell and Pete and Ian Gillespie. It famously released 24 different beers in its first 24 weeks, in tiny 50-litre batches. Today it operates in a former petrol station on Aro Street, and has a second site for wild-fermented and experimental brews.

The brewery has collected a string of brewing and business accolades, including a silver medal at the 2014 World Beer Cup; topping the Deloitte’s Fast 50 in 2015; and the Society of Beer Advocates Best Brewery award in 2014, 2015 and 2016. Garage Project has also created collaborations with other businesses as diverse as Singapore Airlines, The Royal New Zealand Ballet, Wellington Zoo and Weta Workshop.

“Ever since it started Garage Project has built a reputation for boundary-bending beers created with unusual ingredients and techniques. The fact it won 26 medals shows that this innovative approach also produces a wide range of beers that are technically excellent in their delivery,” said Alve.

“This year we had a record 964 entries, up from 946 last year and 858 in 2015. The Brewers Guild Awards are easily the biggest and most-respected beer competition run in New Zealand. We have international beer judges working to the highest standards, and brewers are very keen to win the recognition of their peers.”

The Guild also recognises achievement in other aspects of the brewing industry:

For the full list of medal winners go to www.BrewersGuild.org.nz