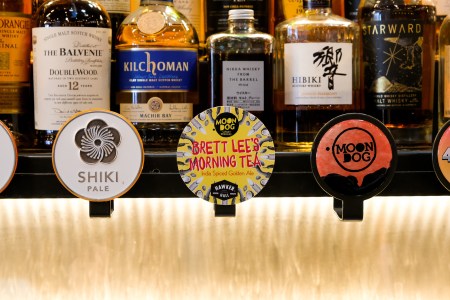 The beer forms part of Hawker Hall’s festival series, which is celebrating all things Indian throughout October, with a Bollywood takeover and features an Indian spin on traditional dishes matched with local independent brewers.

“We are lucky to have a melting pot of cultures working at Hawker Hall. The Festival Series gives us the chance to celebrate our chefs and the events and food in their cultures that they hold close to their hearts,” says Head Chef Damian Snell.

The collaboration beer, which is a nod to Lee’s Bollywood debut, will be served as part of a five-course menu.

“When we were first decided to do the Bollywood theme, initially we thought there would be an Indian craft brew scene but there was nothing. So, we decided to brew our own but needed a super experimental brewery who would be keen to jump into the deep end and come up with something new and unique. That’s how Moondog came into the picture,” Snell added.

Moondog’s Adam McNulty said the brewer wanted to create a beer that would promote the key flavours found in the food.

“The nose on this beer is insane. It smashes you in the face with cardamom and soon levels out so you can enjoy the different layers of coconut and chilli, without the sweetness or the burn,” he said.