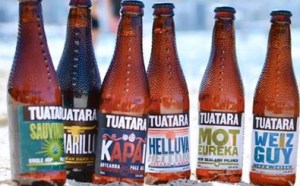 The award-winning Tuatara Brewing Company, one of the largest craft brewers in New Zealand, has been bought by DB Breweries.

The craft brewer has said that it will continue to produce beer at its current premises on the Kapiti Coast and at its pilot brewery in Wellington. Tuatara founder and master brewer Carl Vasta says he continues to be passionate about the New Zealand craft beer industry and is committed to being part of Tuatara and its future growth.

“Brewing beer and talking about beer is my passion. With the support of my family, we have been able to grow Tuatara into a successful business. In order to take things to the next level we need assistance. That’s why we’ve teamed up with DB. Now, I intend to get back to the brewing and step out of the business end.”

Andy Routley, the Managing Director of DB Breweries, said that Tuatara’s passion as well as its focus on quality and innovation are what attracted the company to the purchase.

“Craft beer is an exciting segment of the Kiwi beer market,” Routley said, “and Tuatara is the champion of Kiwi craft breweries. We are excited by Tuatara for three reasons. Firstly, Carl and his team are passionate about making great beer and their customers are equally passionate about enjoying it.

“Secondly, they have a focus on quality and innovation. And thirdly, we believe that the beers they produce have all the characteristics for their continued success in the wider local and global marketplace.

“We want to see Tuatara achieve its full potential, so we’re not going to mess with a winning formula.

“I have a great deal of respect for what Carl and the team have achieved and we are excited to be able to tap into their craft beer knowledge and experience. The way we see the business developing is relatively simple: we’ll leave it to Tuatara to make great beer. We’ll help get it to more people.”

Tuatara’s decision to sell was not taken lightly, but ultimately the opportunity to take the beers to a wider domestic and international audience won through.

Tuatara National Sales Manager, Blair Harley, said: “This is an exciting time for Tuatara. We have made some ground going it alone but with the backing of DB we truly believe we can take Tuatara and Kiwi craft beer to the global stage. We look forward to working together to build more successful trade relationships in the future.”

The Tuatara Brewery was established in 2000 and recently won the supreme award at the Brewers Guild of New Zealand 2016 Beer Awards. In 2016 the craft brewer produced over two million litres of beer, making it one of the largest craft breweries in New Zealand.