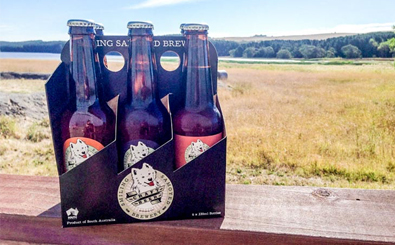 Fleurieu Peninsula brewery Smiling Samoyed has won the Best Beer in Show trophy beating more than 40 brewers for the title.

Described as a celebration of the darker malts, husband and wife team Simon Dunstone and Kate Henning add six different specialty malts to their Dark Ale to produce a blend of roasted, nutty, dark chocolate and coffee flavours.

Announced at the Adelaide Beer & Barbecue Festival at the Adelaide Showground, the awards were dominated by South Australia, with all but one of the trophies won by SA-based breweries.

“This year’s awards attracted 196 entries from 42 brewers of all sizes and from four states of Australia, with all entries judged blind by an expert industry panel,” Fahey said.

Brewer of the winning beer, Smiling Samoyed, was founded in 2012 by Dunstone and Henning after a home brewing hobby got out of control.