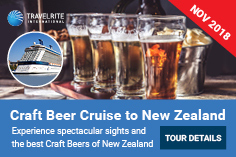 Dave Philips, one of Australia’s most knowledgeable craft beer experts, will host an upcoming tour to New Zealand visiting some of the country’s best known breweries, meeting head brewers and tasting classic beers and ales.

Dave has a passion for locally brewed craft beers and has developed strong relationships with many local brewers. “I simply loved having beers close to the source, learning about those who make the beer and simply being within the production environment,” explains Dave.

Dave’s Travel and Events have received the Trip Advisor Certificate of Excellence in 2016 and 2017 and a NSW Tourism 2017 Gold Award.

Held from 18 November to 2 December, the group will first fly to Auckland for a sightseeing tour before visting Hallertau Brewery, a New Zealand pioneer in crafting barrel-aged and sour beers.

Having boarded the Celebrity Solstice, you’ll cruise to the spectacular Bay of Islands to visit McLeods Brewery in Waipu. Jason Bathgate, the head brewer has worked for two champion New Zealand breweries and was instrumental in winning seven medals at the 2016 Brewers Guild of New Zealand.

In Napier you’ll visit Zeetlandt Brewery, inspired by many classic beer styles found throughout Europe. Arriving in Picton, it’s off to a winery to taste some of the famous local Sauvignon Blanc, after which you’ll visit Moa Brewery with an extensive range from lagers to pale ales.

In Wellington you’ll stop in and visit several breweries including the Fork & Brewery and meet head brewer Kelly Ryan, one of New Zealand’s most respected beer makers. After lunch, travel to the Arvo Valley and the Garage Project and visit this regular festival brewer’s cellar door and tap room.

In Akaroa the group will visit the Three Boys Brewery and sample some of their impressive core range as well as some of their reserve beers. In Dunedin, it’s time for a stop in at Emerson’s Brewery, established by Richard Emerson in 1993 and one of New Zealand’s biggest craft brands.

On days at sea Dave Phillips will lead his craft beer master class program, giving you an insight into the history of beer, beer styles, ingredients, techniques and innovations.

Priced from only $4,790 twin share, including air fares, accommodation, visits to breweries and Dave Phillips Master Classes and sightseeing at ports of call.