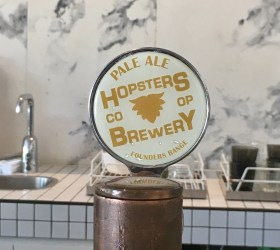 The Pale Ale, created by head brewer Scott O’Brien, will be available at a number of craft beer venues across Sydney, with other launch events scheduled throughout the rest of the month.

This development marks the transition of the business from a homebrewing community to contract brewing. Hopsters has also unveiled a refreshed website.

“Releasing our first commercial batch craft beer is a significant milestone for Hopsters and another stepping stone on our journey to opening our own brewery and tap room,” comments Marco Vargas, one of Hopsters’ founders. “From day one, Hopsters has been about more than just beer; it’s been formed around a community actively collaborating to build a successful business and realise a dream.”

Hopsters was founded in December 2016 in Sydney, following the success of co-operative breweries in the USA and Europe. For a one time membership fee of $250, Hopsters’ members become shareholders of the co-operative with five $50 shares. Benefits include part-ownership of the brewery, having a say in which beers Hopsters brews, access to member-only events and discounts, educational programs such as Learn to Brew Days and the opportunity to help drive the direction and success of the business.