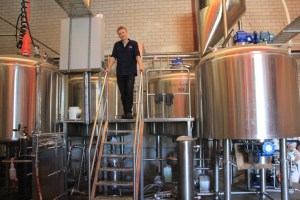 Vegan brewer Yulli’s Brews has opened its own brewery and tap house in Alexandria, Sydney, after four years of ‘gypsy’ brewing in and around Sydney.

The company, which has run a vegan restaurant in Surry Hills for the last 10 years, has transformed an old 570 sq m car mechanics’ warehouse into a brewhouse and two-storey bar and restaurant, with a commercial production kitchen. The venue opened on the weekend of 21 June.

“We’ve been working on it for about a year and we’re at the pointy end now,” says James harvey, who founded Yulli’s Brewery with Karl Cooney. “It’s been a massive process. Since bringing Yulli’s Brews into the frame, the beer game has really come to fore. Over those four years with the brewing, it was nice to have a little front for the company, but it was never the same as having our own establishment dedicated to the beer. I want to reiterate the impact our brewer Tom Davies has had on the production of our beers. He’s been a real asset to us since he came on board and has earned the titled of head brewer in doing so.”

The brewery has a 2,000 litre four-vessel brewhouse, and a 4,000 tank. There are seven 4,000 litre fermentation vessels and two 4,000 litre bright tanks. While the brewery is currently canning with East Coast Canning, it expects to have its own canning line in place within the next month, making it 100% in-house. All the beers made by Yulli’s are vegan and are named for real people that the two founders have met along the way.

“In beer, most of the animal products that get put in there are in clarifying agents – they sometimes contain milk products or egg,” adds Harvey. “We’ve named the beers after mates of ours or people we’ve met along the way. We’ve named them after people who’ve worked for us at the restaurant. Seabass is one of my oldest mates, while Norman is my business partner Karl’s old Maths teacher from school. We try to put a bit of a caricature behind it. There’s a lot of branding out there that’s very serious. But we like to have a bit of fun with it.”