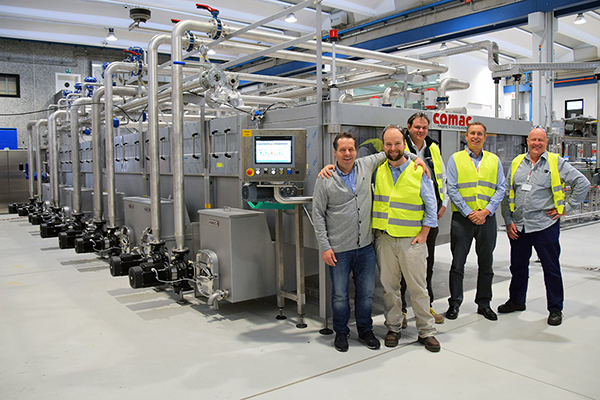 Brick Lane Brewing was established in 2017 by a group of friends, including industry luminaries, sporting personalities and business people, who chose a greenfield site in Dandenong South as the location for their purpose-built, world class brewing facility.  Construction on the site commenced in late 2017 with installation of the bottling and canning line commencing in June 2018.

Prior to sign-off the team at Brick Lane Brewing met with CoMac’s owners Marco Scudeletti and Fabio Donadoni to finalise the specifications of the line.  Brick Lane was impressed with the meetings and especially the knowledge and passion that Marco and Fabio brought to the negotiations.

The core CoMac components of the new line are:

After the successful equipment FAT at CoMac’s Bergamo headquarters, Jon remarked that he was very impressed by the CoMac team, the company culture and capabilities, the quality of the equipment and attention to detail during the FAT, and the professionalism shown by Matt from HBM (CoMac’s representative in Oceania).

CoMac have over 120 installations across the US craft brewing scene and are a preferred supplier to Heineken Group globally.  CoMac offer keg, canning and bottling lines as well as peripheral equipment including flash & tunnel pasteurisers, CIP systems, carbonators, premix systems and conveyors.

CoMac is represented in Oceania by HBM Packaging Technologies.