By Tam Allenby on August 10, 2017 in Beer & Breweries, Craft Beer, Fun Stuff, Industry, News, Rest of the World, Venues, Where to drink 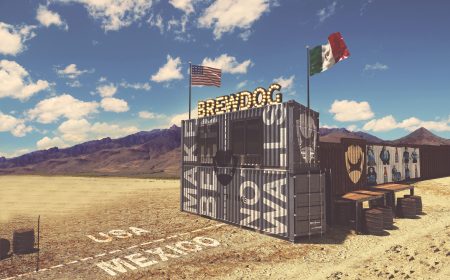 BrewDog has announced plans to open a new craft beer bar that straddles the border between the USA and Mexico.

Dubbed ‘The Bar on the Edge’ the specific location of the bar is top secret, with BrewDog only revealing that half of the bar will be in Texas and the other half in Chihuahua, Mexico.

The remote location of the bar reflects the Scottish brewery’s intention to expand to the ‘farthest reaches’ of the United States, and while they haven’t mentioned Trump by name, according to BrewDog its controversial positioning is a “physical statement about collaboration and inclusivity”.

“Beer has always been a unifying factor between cultures – and our business was born from collaboration and an inclusive approach – so we thought it would be fun to place the bar a few feet further to actually cross the US-Mexico border too,” said James Watt, BrewDog Co-founder.

“We will request official permission from the local authorities to put it there and adhere to any red tape stuff, but I guess it would make it more difficult to build a wall if there’s a BrewDog bar in the way.

“We’re planning on putting the bar there anyway until someone tells us to move it.”

The border bar plans also indicate that BrewDog will not tame its anti-establishment approach as it expands into the more conservative US market.

Constructed from old shipping containers, the bar would officially be defined as a temporary mobile building; BrewDog plans to serve Mexican beers on the US side, US beers on the Mexican side, and its range of craft beers as well – brewed at its new location in Columbus, Ohio.

BrewDog hopes that the bar will become a “magnetic pole” for craft beer drinkers to come together, as its location will obviously be far from regular footfall.

“Beer is a universal language and has a heritage and legacy that far out dates the creation of most nation states,” added Watt. “So we want to celebrate its capacity to bring cultures together with this ‘Bar on the Edge’.

“Craft beer has always been a collaborative and inclusive industry – we certainly couldn’t exist without being welcomed to the fold by many of the US breweries that inspired us – so we want to reinforce its social impact and capacity to bring people together.”

The announcement comes only weeks after BrewDog revealed more details about its plans to open a brewery in Australia.